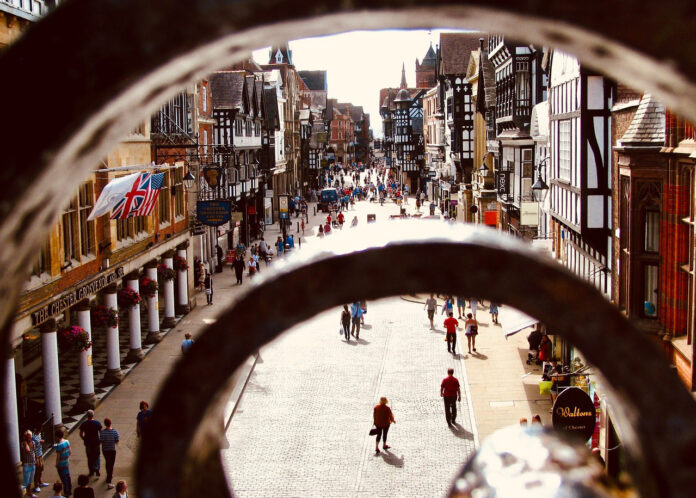 The City of Chester is looking for a new name following the decision by Manchester to drop the masculine ‘Man‘ from its name, becoming just Chester.

The decision by Manchester has unfortunately left Chester looking for a new name for its city, as there can only be one Chester in the north west, and the new Chester (formerly Manchester) has flexed its political muscles and taken control of the name ‘Chester’ from its smaller cousin.

It was a tough decision to drop the ‘Man’ from Manchester and become Chester, but it needed doing. It’s brought us up-to-date with PC society and the 21st Century.

Meanwhile, Chester’s mayor Mark Williams isn’t quite so excited by the news. He commented:

Those Manc pricks. Just because they’ve all become snowflakes we have to change our name? Wankers!

Chester, the old one, is now seeking a new name and is asking its residents to suggest one. Frontrunners include Oldchester, Romanchester and Cestria. What name would you suggest for Chester? A new name has to be selected by the end of the year, when Manchester officially becomes Chester.

Facebook
Twitter
Pinterest
WhatsApp
Previous articleO.E.D. Confirms Collective Noun for a Group of Karens is a ‘Complaint’
Next articleChester FC Confirms Club Will NOT Be Joining European Super League

Darrenhttps://www.chesterbugle.co.uk
Lover of red wine, real ale, Liverpool FC and most things geeky. Darren has been pottering about on the internet since the late 90s, and helps businesses increase their online presence through his agency Engage Web.

A club spokesman for Chester FC has confirmed the club will not be joining the proposed European Super League. The new plans have seen English...
Read more
Education

O.E.D. Confirms Collective Noun for a Group of Karens is a ‘Complaint’

The OED (Oxford English Dictionary) has confirmed in its latest release that the collective noun for a group of one or more Karens is...
Read more
Lifestyle

The popular '3-second rule', where it is believed that food that has been dropped on the floor is fine to eat so long as...
Read more

Darren - 4th March 2020 0
A secret plan formed by the UK government to contain the coronavirus has been exposed. In the top-secret document, plans are detailed on how...

Wrexham to force all away fans to speak Welsh

‘Venice lacks common sense having so much water’ – says Jacob...

O.E.D. Confirms Collective Noun for a Group of Karens is a...

This website uses cookies to improve your experience while you navigate through the website. Out of these, the cookies that are categorized as necessary are stored on your browser as they are essential for the working of basic functionalities of the website. We also use third-party cookies that help us analyze and understand how you use this website. These cookies will be stored in your browser only with your consent. You also have the option to opt-out of these cookies. But opting out of some of these cookies may affect your browsing experience.
Necessary Always Enabled

Any cookies that may not be particularly necessary for the website to function and is used specifically to collect user personal data via analytics, ads, other embedded contents are termed as non-necessary cookies. It is mandatory to procure user consent prior to running these cookies on your website.